All Crimes of Violence

Of Canada's roughly 33 million people in 2007, there were 306,559 incidents of violence recorded by all police services, which is roughly 930 incidents per 100,000 people in the general population, which is just under 1% (0.93%). Roughly half of these incidents were cleared by police on a criminal charge. In 2011, Canada's violent crime rate was roughly 1,230 per 100,000 persons, considerably higher than that of the United States in the same year, at 386 per 100,000, despite the disparity in rates of weapons-possession between the two countries. Winnipeg, Manitoba is currently the violent-crime capital of Canada, although violent crime rates have generally been declining in Winnipeg since 2010. Winnipeg's ranking on the violent-crime severity index was the highest of all Canadian cities that year a 163.9, while Saskatoon was close by 155.7 and Regina was third at 151.2. The violent crime index is a weighted-measure that more heavily emphasizes serious violence such as murder and aggravated assault in calculating its overall ranking.

The homicide rate for 2010 in Canada was approximately 1 per 100,000 people. The province or territory with the highest homicide rate was Nunavut, with 13 per 100,000 people, followed by the Yukon, with 3 per 100,000. On average, between 500 and 600 homicides occur nation-wide in Canada. Homicides in Canada have been more or less falling since the 1970s, perhaps due to the aging population. The major findings from Statistics Canada in recent years regarding homicide trends are clear and straightforward:

Jobs most likely to get Canadians murdered

Below are the homicide rates for some of the most murderous occupations in Canada. Keep in mind that rates for all of these occupations is quite low, to begin with, as compared with international data.

Select your region from dropdown and hit submit. The database includes all 2,750 Police Services across Canada. If you would like to search all statistics for all crime (including homicide and violent crime), go to Crime Statistics in Canada, and Crime Statistics in the US for a more detailed city-by-city or region-by-region analysis.

Select a region from the dropbox above.

In 2010, 72.5% of victims were male, while 27.5% of victims were female. In 2011 this rate had fallen slightly to 71%. This is generally the case not just in Canada but around the world. Men are most commonly both the perpetrators of homicide and the victims of homicide. The proportion of male homicide victims in Canada has been steadily increasing since the late 1970s (when the data began to be collected). See the graph at right, showing the percentage of homicide victims who were male, from 1974 to 2010. Young men aged 18-35 are the most common perpetrators of homicide, and an even larger amount (90%) are accused of homicide in courts of law in Canada. Of the 416 solved homicides in Canada in 2010, 34% involved family members, 34% were between acquaintances, 17% were between strangers, and only 9% involved a criminal relationship. Of all homicides in 2010, 62% (324 out of 523) occurred in people's homes (either a single house, duplex, apartment, or town home, etc), 28% occurred on the open roads, and a small fraction (7%) occurred on commercial property. Despite the dramatic media reports of school shootings, no homicides occurred on any primary, secondary-school, or post-secondary school property that year. Nor were there any murders in hospitals, in bars, restaurants, or anywhere on the subways. 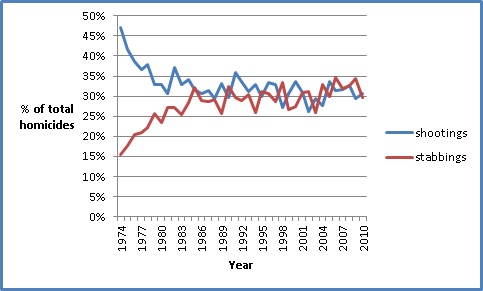 In 2010, shootings accounted for 31% of homicides, stabbings for 30%, beatings for 21%, and strangulation for 7%. Interestingly, the disparity between homicides by shootings and homicides by stabbings began to shrink in the 1970's and is virtually gone today. See the chart at the right.